Sir Syed Ahmed Khan, the father of the Muslim renaissance was born on 17th October 1817 A.D. at Delhi in a respected family of Syed dignity detecting its descent from Hazrat Imam Hussain (A.S.) and it also had strong connections with the Mughal Empire. Sir Syed received his first lesson in Arabic from Shah Ghulam Ali. At a young age, he was well built, burly, and refined. He inherited many skills from his father who excelled in Archery and Swimming. He received a fairly good elementary education in subjects taught in his times in the madaressahs. 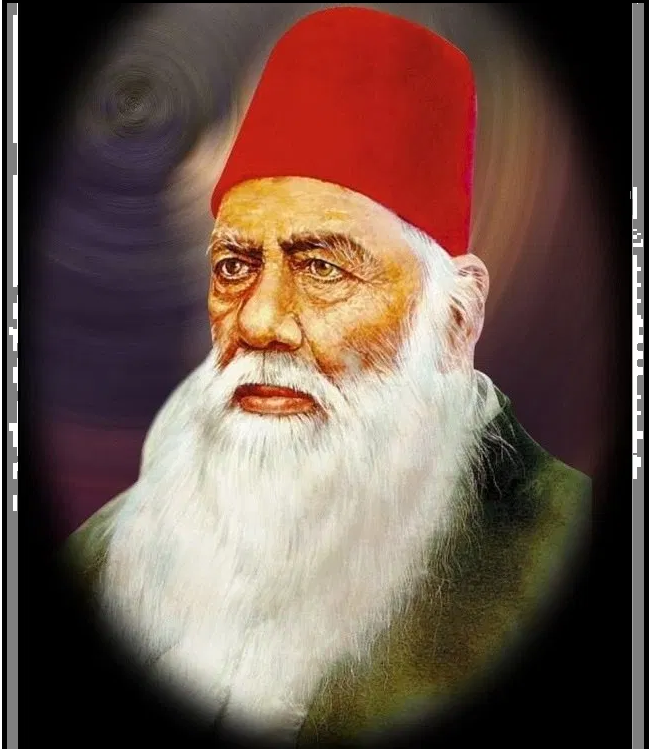 He was taught Arabic, Persian, and recitation of the Holy Quran under the wise guidance of his mother, Aziz: Al-Nisa. He also studied some books in Arabic Syntax, Grammar, Logic, and Philosophy a few elementary textbooks of Mathematics, Algebra, and Geometry under the guidance of his Uncle. He studied medicine in the clinic of Hakim Ghulam Hyder Khan.

He had to seek a job to earn a living. When he was just 19 years old much against the wishes of the family he joined the service of East India Company as a Serishtadar in the court of his uncle who was Sadr Amin in Delhi. He started writing Articles, Books, and Digests, etc. to mark himself as an Author. His original research work Asar-us-Sanadid is partly a biographical encyclopedia of contemporary personalities of the city (Delhi) with a list of 142 Hindu and 59 Muslim rulers who reigned from 1400 B.C to 1853 A.D. He gave a list of various cities and forts which have composed it (Delhi) nineteen in all. This book won him International fame and in recognition, he was made an honorary member of Royal Asiatic the book was published in 1844 A.D.

Sir Syed considered that social reform and education must precede political development. His role as a practical social reformer and educationist began in the 1860s. He was fully convinced that education holds the key to all progress and prospects of reform. He had pondered deeply on the condition of Muslims especially with respect to the educational backwardness.

In 1858, therefore he made his first attempt at education by opening a school at Moradabad. Especially for the study of modern history. He had also visited England with his both sons Syed Mahmud and Syed Hamid for a 17 months tour. It was his first and last tour to England. Traveling across England, he studied the British Educational system and appreciated it. At there, he was awarded the order of the star of India from the British Government.

At that time Sir William Muir’s boot on “the life of Muhammad” agitated him for its distortions. Then he said reading this book, it has burned my heart and its injustices and prejudices have roasted my heart. I have resolved to write a biography of the city Prophet just as I had earlier intended, even if I have to spend all my money and become like a beggar. Begging for alms. Then he wrote a reply to Muir in the form of a series of essays on the life of Muhammad (PBUH).

In his own opinion, this was his greatest work to the Muslim community and would guarantee his place in paradise. After doing this great work he came back to India. Now, he demanded to the British India Government that either an Urdu faculty should be created in Calcutta University or a separate university established in the North-West province. The government of India’s reply to his demand was that it appreciated his past works in the educational field and it promised him support. This gesture of Government provided quite an incentive to talented men and generated a deal of public interest. Then a college named Muhammadan Anglo Oriental College was established.

In 1875, it turned to a university called Aligarh Muslim University due to Sir Syed Ahmed Khan’s huge efforts. It was another great achievement for him in the educational field. More than a century ago on 27th March 1898, India lost a great man. But, he is still living in our hearts due to his endless struggle. People dies but their works don’t. He was a great revolutionary leader. A great Human. He always loved Muslims but never hated Hindus.